The film brilliantly captures the manic energy of New York City’s Diamond District, a bustling commercial stretch on Manhattan’s 47th Street between Fifth and Sixth Avenue. A preserve for the barter economy and the transaction sealed by a handshake, this small slice of the city has sustained a unique way of life.

It has survived urban decay, revitalization and gentrification. It has withstood the rise of modern finance and e-commerce, resisted economic booms and busts, and adapted to the ebbs and flows of global migration.

In my book “Stateless Commerce: The Diamond Network and the Persistence of Relational Exchange,” I explore how New York’s Diamond District seems to withstand the forces of economic change. I found that the mechanisms of a pre-modern economy are precisely the devices that allow diamond merchants to thrive in the 21st century.

A 17th-century industry in a 21st-century city

Forty-seventh Street’s significance grew substantially as refugee diamond merchants fled to New York during World War II. When Belgium and Israel established themselves as post-WWII diamond hubs, the industry for decades was dominated by Jewish merchants triangulating from Antwerp, Tel Aviv and New York. A visitor in the 1970s would have heard as much Yiddish and Hebrew as American English. Starting in the 1990s, a surge of Indian diamond merchants entered the industry, eventually making Mumbai the unquestioned capital of today’s diamond world.

Even as the faces have changed, business practices have remained the same. The New York Times in 2001 described 47th Street as “an anachronism, a 17th-century industry smack in the middle of a 21st-century city.” And an ethnographer of 47th Street once said that the diamond industry allows its residents “to mix in and stay apart, [to] adapt to new times in ways that are both modern and traditional, indeed ancient.” 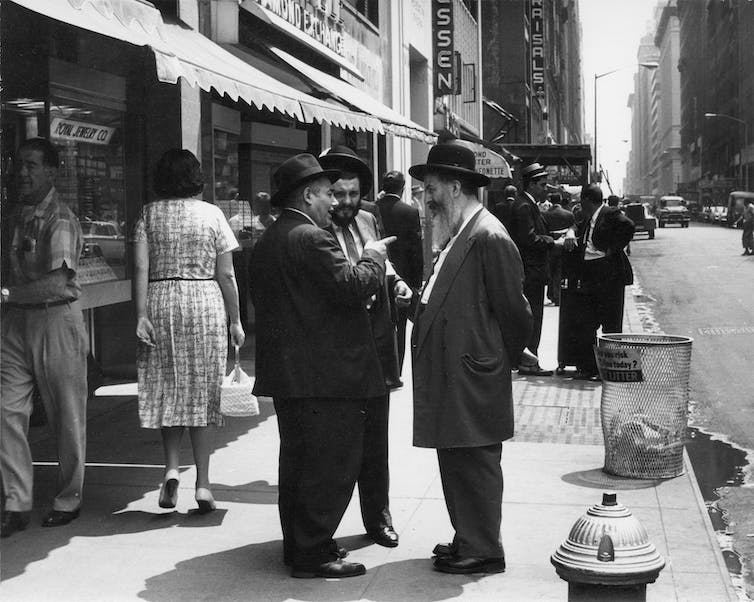 The district’s endurance is remarkable. It withstood the area’s decline in the 1970s and 1980s, a period when Times Square – just a few blocks west of the district – was home to a high crime rate, peep shows and what Rolling Stone called “the sleaziest block in America.”

More recently, the district has survived the area’s rapid gentrification. The district remains an island of cramped retail space and backroom manufacturing even as Manhattan commercial rents reach historic highs.

Visit 47th Street today, and the stylish pedestrians of Fifth and Sixth Avenues vanish. In their place are elderly, ultra-Orthodox Jews wearing black overcoats and fedoras; south and central Asians with traditional karakul hats; and gaggles of merchants shouting in languages from across the world.

Diamond merchants – also known as “diamantaires” – openly do business on the sidewalk, negotiating terms for bundles of gemstones as if they were fruit in an open-air market. Others bark on cellphones and hold briefcases handcuffed to their wrists, sealing deals using lingo that outsiders can’t comprehend. Jewelry salespeople peddle their products to passersby, luring customers in a way that evokes the merchants of an Old World bazaar. 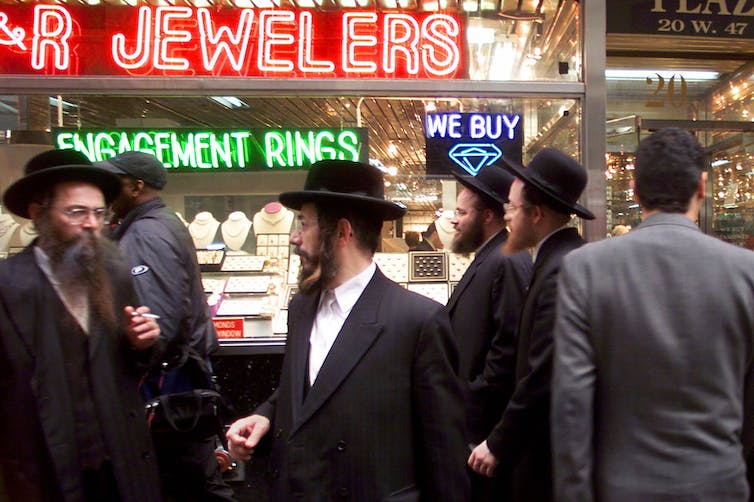 Deals are made out in the open. AP Photo/Mark Lennihan

Massive risk – with no legal recourse

How has the diamond district withstood the pressures of time?

It helps to understand the mechanics of a typical diamond transaction.

Forty-seventh Street is, in fact, a thick network of middlemen, with diamantaires buying and selling large caches of diamonds much like stock brokers buy and sell at the New York Stock Exchange. And since diamonds are so expensive – a pocketful of diamonds easily exceeds hundreds of thousands of dollars in value – diamantaires rarely have sufficient liquid assets to pay for stones in cash. So they rely on purchasing stones on credit.

But a credit sale exposes a diamond seller to an enormous financial risk. Because diamonds are portable, universally valuable and virtually untraceable, a would-be purchaser on credit could easily abscond with a cache of diamonds. Even if a thief skipped town, leaving assets behind that a jilted seller could recover, those assets would pale in value to lost diamonds. 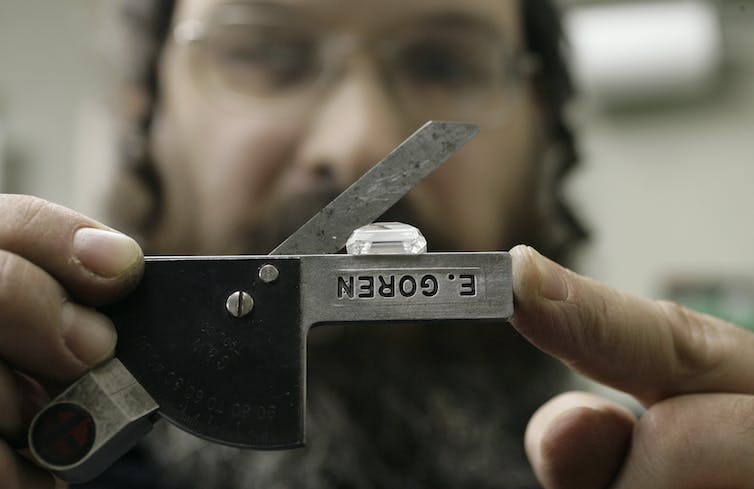 A diamond cutter displays a tool used to determine the angles of a large emerald cut diamond. AP Photo/Kathy Willens

Though credit sales impose some risk on sellers in every business, other industries can use the law to secure their sales of expensive items. Banks attach liens on cars or mortgages on homes, which enable those lenders to recover the secured items if payment is missed. Bonds are routinely administered when expensive products arrive in ports of entry. Sellers are even given assurances by intermediaries for credit card purchases. These legal devices give sellers and lenders the assurance that they can recover funds from a cheating or overextended purchaser.

Your reputation is all your have

If there’s no long arm of the law, what prevents theft and other forms of wrongdoing?

According to a 1984 New York Times article, diamantaires “trust each other not to walk away with the world’s most valuable, easily concealed commodity … They are protected from embezzling only by the character of those who transport.” The article concluded that mutual trust is “the real treasure” of the diamond industry.

A market defined by mutual trust is all well and good. But merchants know that blind trust is naive. They’re aware that the diamond industry – like all others – includes many Howard Ratners, and that trust only works when there are repercussions for bad behavior.

The true genius of the Diamond District, I discovered, is a reputation mechanism that rewards honest behavior and shuns merchants with a blemished record.

There are two pillars that hold people accountable.

First, the industry imposes economic sanctions on those who fail to uphold their financial obligations. A trade association publicizes to the entire industry the identities of anyone reported to have cheated, misallocated funds or exhibited any disreputable conduct. The formal mechanism is a bulletin board that – much like the “Wanted” posters in the Old West – displays pictures of individuals who haven’t paid their debts. Those whose faces appear on the wall are known to be in default and are shunned by the industry. Those who remain off the board and maintain an unblemished reputation are guaranteed a lifetime of lucrative business. 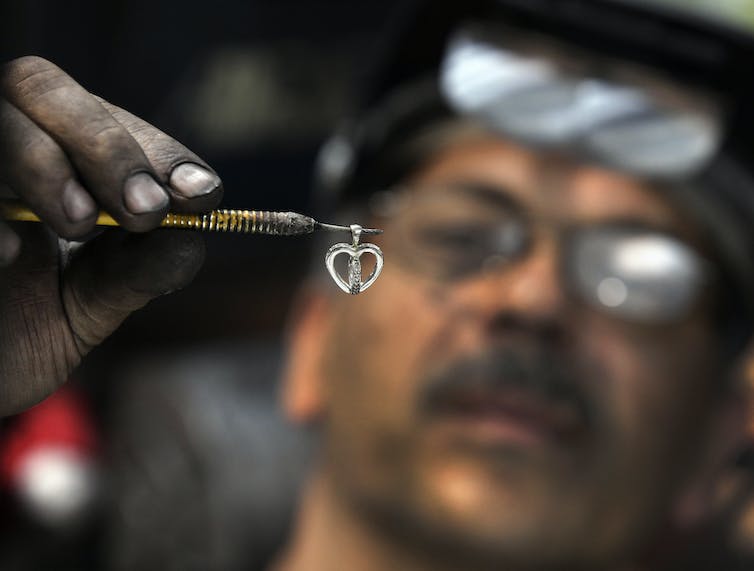 An Egyptian jeweler named Ramses Said has been working at his family’s Diamond District business since he was 14 years old. AP Photo/Richard Drew

Second, families and communities police their own. Family businesses form the backbone of the industry, and reputations are bequeathed and inherited. Those who break the code of trust bring harm not only to their own reputation but also that of their family. The reputational stakes are high, since many plan to bequeath their lucrative businesses to their children. They’re also sources of employment for extended family and ethnic compatriots. Since families and communities have so much to gain by everyone behaving honorably, they bring shame and impose penalties to any of their own who cheat in the business.

The importance of business reputations explains why the industry has been able to sustain a pre-modern, pre-legal system. It allows old world commerce to outperform modern capitalism on its home turf – and the Diamond District is a reminder that family businesses and community enterprises still have a place in the 21st century. How Minneapolis made Prince A brief history of black names, from Perlie to Latasha

How to Avoid Someone at a Party Without Being a Jerk?

How Minneapolis made Prince