Many religions urge their adherents to be charitable toward those in need.

Jesus directed his followers to sell their possessions and give alms to the poor. The Hebrew Bible instructed the Jews to provide generously for neighbors and strangers.

But as media technologies have raised awareness of global suffering, some have asked if the injunction to aid neighbors applies to distant strangers on the other side of the world.

During the late 19th century, a growing number of Americans insisted that the answer must be “yes.” In my recent book, Holy Humanitarians: American Evangelicals and Global Aid, I show how Protestant missionaries, ministers and media moguls persuaded a significant segment of the U.S. population to embrace the ideal of international charity.

The 1890s was a pivotal decade in the extension of American philanthropy abroad.

As the United States expanded its global reach, more citizens were traveling overseas. Technological innovations – especially the transatlantic telegraph – made possible the rapid transmission of reports on political conflicts, economic crises and natural disasters occurring around the world.

The invention of the Kodak portable camera in 1888 enabled eyewitnesses to document humanitarian catastrophes, and advances in printing processes facilitated the mass reproduction of their photographs.

Hoping that sensational stories and graphic pictures of people in pain would raise awareness of global affliction while also increasing circulation, newspaper and magazine editors published heartrending images and tragic tales of distress they received from correspondents in foreign lands.

No periodical did more to draw attention to distant suffering at the turn of the century than the Christian Herald – at the time the most widely-read religious newspaper in the United States.

Starting with his purchase of the New-York based weekly journal in 1890, the entrepreneurial philanthropist Louis Klopsch worked to make the Christian Herald the nation’s premier purveyor of news about overseas disasters. 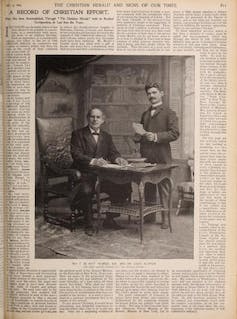 With the help of his editorial partner, the charismatic preacher Thomas De Witt Talmage – pastor of the United States’ largest church – Klopsch solicited first-hand accounts and “exclusive” photographs of calamities from a vast network of missionary contacts stationed across the globe.

But Klospch and Talmage went further than merely chronicling catastrophes such as the food shortage in Russia in the early 1890s, the Armenian massacres of 1894 to 1896, or the Messina earthquake that devastated southern Italy in 1908. Insisting that Americans had a moral obligation to relieve suffering around the world, the two spearheaded massive fund-raising campaigns to assist the afflicted. 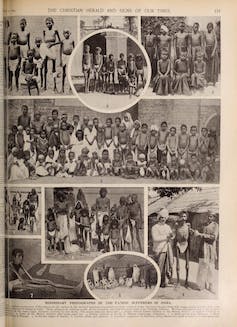 During the India famine of 1900, for example, the Christian Herald collected over US$1.2 million for food assistance, medicine, and orphan care.

All offerings went directly to local volunteers – usually missionaries – who provided services for free. The missionaries knew the language, understood the culture, were familiar with the needs and conditions on the ground, and could therefore disseminate aid quickly and efficiently.

At the close of every campaign, the newspaper published audited financial statements accounting for each donation and disbursement.

In appealing for contributions, the Christian Herald urged readers to respond generously to descriptions and depictions of distress.

Sufferers on the other side of the world were not strangers, Klopsch and Talamge argued, but part of the same human family. The Bible proclaims that God “hath made of one blood all the nations of men.” Therefore, the editors insisted, charity “must not be limited to our household, nor to our own countrymen…. Neither distance, nor difference of race, nor unworthiness is to be a barrier.”

Like the Bible story of the good Samaritan who stopped to help a foreigner, the Christian Herald’s subscribers should extend mercy beyond geographical borders and social boundaries. 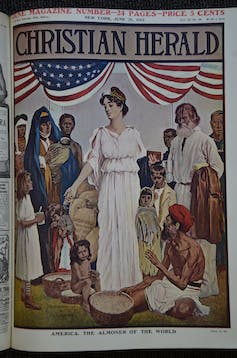 By sending relief abroad, Klopsch and Talmage contended, their newspaper would help the United States fulfill its God-given humanitarian mission. “America,” the editors proclaimed, was destined to become “the Almoner of the World” – a redeemer nation that possessed unique power and resources to rescue the needy and oppressed.

The Christian Herald’s pleas for international charity proved remarkably persuasive. By the time Klopsch died in 1910, the newspaper’s readers had donated over $3.3 million – approximately $89 million in today’s money – to domestic and foreign aid.

No other humanitarian organization in this period came close to matching the Christian Herald’s fundraising record or ability to arouse concern for affliction both within the United States and world wide.

From Klopsch’s time to our own, presumptions about the United States’ divinely-ordained responsibility to rescue the afflicted have inspired numerous humanitarian interventions. Aid agencies have continued to rely on photographs of strangers in distress – from the victims of India’s famine that filled the Christian Herald’s columns in 1900, to the lifeless body of Syrian toddler Alan Kurdi that went viral in 2015 – to publicize disasters and prompt donations.

While many relief efforts since the late 19th century have saved lives, critics of the aid industry have cautioned that they can also have negative consequences.

According to scholars such as Alex de Waal and others, disaster remediation and development schemes have often fueled corruption, exacerbated poverty and bolstered authoritarian regimes.

Ethicists warn that graphic images of affliction reinforce inequalities between privileged donors and relief recipients, leaving in place the structural disparities that cause and perpetuate global suffering.

But even if the Christian Herald’s methods of mobilizing support for distant strangers have produced mixed results, I argue, the newspaper’s arguments for extending compassion beyond national borders and social barriers remain relevant.

At a time when nationalism and racism are hampering efforts to reduce suffering both at home in the United States and around the world, Klopsch’s contention that true charity knows no bounds is worth remembering.

[ Thanks for reading! We can send you The Conversation’s stories every day in an informative email. Sign up today. ] Why Trump’s post-impeachment actions are about vengeance, not retribution The power of a song in a strange land How China does Valentine’s Day